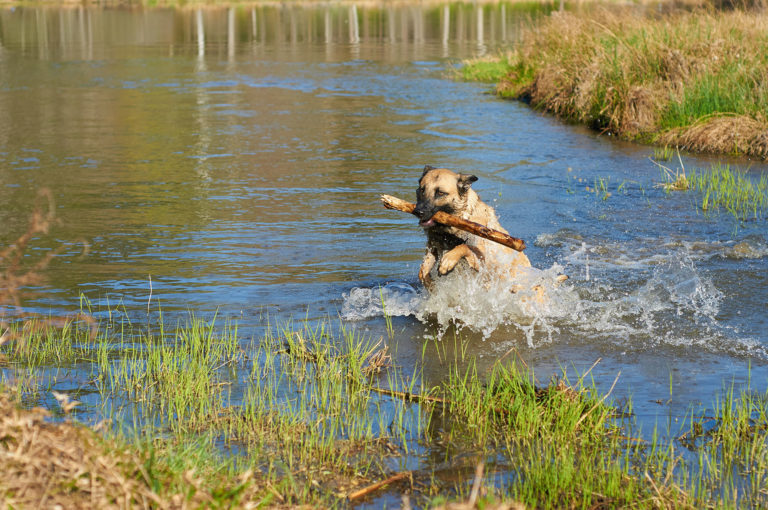 I am pleased to announce that the new edition of our in-school science magazine has now been published, and printed copies will be available from the Sixth Form Centre Foyer next week. The theme for the magazine this month is water. Thank you to our Sixth Form students for producing such an insightful and interesting edition. We include here a sample article from the November Monthly Molecule.

Blue-Green Algae and Dogs
Blue-green alga is not actually algae, it’s the term used for cyanobacteria that clump together in bodies of water (such as lakes, ponds and even garden birdbaths) to give the appearance of algae. The bacteria cannot be seen by the naked human eye until it takes the form of clumps. Once in clump form it can look like green or brown dots on the water surface. It only looks green or blue (hence the name) when in bloom, at which stage it can multiply rapidly. The bloom needs heat and nutrients, as a result, when there is less rainfall and hotter weather, cyanobacteria are more common. Algae is vital for our survival as it’s estimated that at least half of the planet’s oxygen is produced from it; yet when toxic blooms take over the water source, algae can be fatal.

Toxic blooms can be caused by more than 30 species of cyanobacteria, which can produce 4 types of toxicity; hepatotoxin – damages the liver, neurotoxin – damages nerve tissues, nephrotoxin – destroys kidney cells, derman toxin – causing hives or rashes. Some types of blue-green algae can kill a dog in just 15-60 minutes after drinking the contaminated water. The harmful toxins produced can stop a dog’s liver from functioning properly.

The wind will often blow blooms of algae to the edges of lakes, rivers and ponds and so this area is more likely to contain higher concentrations of the bacteria. This is unfortunately where your dog is most likely to drink or swim from. The algae may be present in a harmful form even if you cannot see it, so any warning signs in the area must be adhered to as to protect the safety of yourself, and your pet.

Does it just affect dogs?
It more commonly affects dogs, as dogs will get in a body of water even if it looks or smells bad (including when it contains cyanobacteria). It is toxic for animals (including marine life and us humans) as well as the environment. Symptoms for humans include rashes, sickness, fever and headaches, in more serious cases liver and brain damage has been reported.