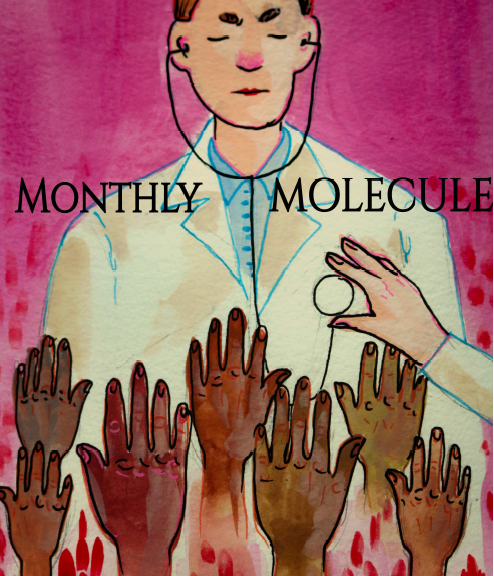 Our amazing Year 12 Scientists have now published the July addition of the Monthly Molecule magazine. The theme of this month’s instalment is Inequalities and Parallels in STEM. The beautiful Image accompanying this post was created by a member of our Senior Prefect team.

We include here an article from this addition of the Monthly Molecule. Some copies of the magazine will be distributed to the older students, however spare copies are available in the Sixth Form Foyer.

The Truth about Maternal Mortality Rate

It is not an unknown fact that pregnancy, and especially giving birth, can be an extremely dangerous process for a woman to go through. The maternal mortality rate in 2015-2017 was estimated to be around 9.19 deaths per 100,000 maternities. However, when we look further into the facts, we see a larger disparity within these numbers. The seventh annual report by the MBRRACE-UK (Mothers and Babies: Reducing Risk through Audits and Confidential Enquiries) says that while pregnancy is still “very safe” in the UK, there is still a huge disparity between the maternal mortality rates in different ethnic backgrounds. The report states that in 2016-2018 that 547 women died during or up to a year after pregnancy from causes associated with their pregnancy, this is out of the 2.2 million women who gave birth during that time. In that period 34 Black women died in every 100,000, compared with 15 Asian women in every 100,000, and 8 White women died among every 100,000.

Marian Knight, lead author of MBRRACE-UK and professor of maternal and child population health at the University of Oxford lamented that this was “unacceptable”, concluding that “Systemic biases prevent women with complex and multiple problems receiving the care they need” and that to improve these statistics there would need to be sustained focus on the problem. So, is it simply systemic racial bias that means black women in the UK are 4 times more likely to die due to pregnancy complications, or is it an underlying medical reason why Asian women’s risk of death is twofold higher than that of a white woman’s? Why are women with pre-existing conditions such as epilepsy more likely to die during pregnancy and why does this risk also increase by 3 times for women from low-income backgrounds?

There is some evidence to say that it is partially due to natural physiological difference between ethnic backgrounds. The PMC in the USA report that cardiovascular conditions, cardiomyopathy and other medical conditions contributed to 40.9% and 46.8% of pregnancy related deaths among white and black women. They also found that not only do black women in the USA have higher case-fatality rates, but they are also more likely to experience comorbid illnesses and pregnancy complications. Black women have higher rates of haemorrhage, asthma, cardiac events, preeclampsia—even in women without pre-existing chronic hypertension, and infection.

More research needs to be done into how to properly treat pregnant women of ethnic minorities as to close the gap between and lower the maternal mortality rates. Marian Knight also states that the situation may have worsened since the beginning of the COVID-19 pandemic, “This needs to be addressed urgently, particularly since the impacts of social and ethnic inequalities, multiple disadvantages, and epilepsy are likely to have been amplified during the COVID-19 pandemic.”

Our healthcare systems and research facilities must become more aware of the problem at hand and must adapt to the new world environment. Women who are a part of minority groups should not feel that they will be treated differently and thus more likely to die when giving birth in the UK. Education and understanding are the route to success.