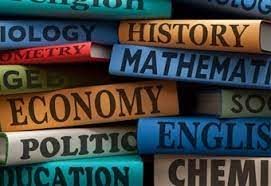 In order to share their love of everything scientific, a group of our lovely A level Scientists have got together to create a science magazine called the Monthly Molecule. The magazine covers up-to-date research in the fields of Biology, Chemistry and Physics. It also features documentary and book recommendations along with a monthly puzzle. Please encourage your son or daughter to collect a free magazine from their Science teacher of the Sixth Form Foyer.

Here is an article from the magazine just to pique your interest. The article has been written by one of our Year 12 Chemists.

We all know that marine litter is a big problem for the Oceans, it causes harm to animals and makes the beautiful oceans and seas murky and perplexed. Plastics in the oceans traps animals in debris, suffocates them and can also result in their death. Scientists have found tiny pieces of plastic inside fish, turtles, and birds – the litter blocks digestive tracts and alters growth and reproduction, which can lead to a decrease in their population. Most of the marine litter is mismanaged plastic waste, which is very concerning because plastics remain in the ocean for a long time as they take years and years to decay. So how can this be solved?

Understanding where marine litter goes once it is in the ocean is a big part of understanding the issue and helping individual countries and the international community to develop plans to deal with this problem. The United Nations (UN) has founded the work of ‘Trash Tracking’ – trying to mitigate the impact of mismanaged plastic waste. An example is the Great Pacific Garbage Patch, which is a cluster of marine debris and litter. The Trash Tracker can help answer questions about whether it is growing larger and questions about how much plastic is breaking down or sinking to the bottom of the ocean. This virtual tool will show how countries around the world are connected to the contribution of garbage patches.

The director of the Centre for Ocean-Atmospheric Prediction Studies (COAPS) Eric Chassignet stated that “Knowing where the marine litter released into the ocean by a given country goes, and the origin of the litter found on the coast-line of a given country, are important pieces of information for policymakers”. “For example, it can help policy makers determine where to focus their efforts for dealing with this problem.”

The tracking tool uses worldwide mismanaged plastic waste data as inputs for its model. The model uses data about the ocean and air currents to track where the marine debris might end up by using information from 2010. There is a website where you can watch colourful swirly lines cross the Earth’s oceans. It looks pretty – until you realise it is tracking litter. Researchers at the COAPS use sophisticated ocean models to map the ocean and predict currents that help scientists understand where marine litter released in the ocean is likely to travel and end its journey.

Sir David Attenborough says that we are “shifting our behaviour” when it comes to plastic. In an interview with the BBC, he said “the world is waking up to what we have done to the planet”. He described plastic as “vile” and “horrid” but there is a growing awareness of the kind of damage it can do. His documentary Blue Planet II depicts how many plastic items are drifting in the world’s oceans, and how its affecting animals who live there.  Sir Attenborough concluded that we still need techniques for handling plastic waste. He said: “We still need to know how to dispose of the wretched material, surely if we can invent it, somebody somewhere is going to be able to deal with it, to deal with these mountains of this appalling material.”

Many are getting involved in the fight against plastic, including asking businesses to cut down on plastic uses. Think about what you can do to reduce the amount of plastic you use in your everyday life.